I found this in a used bookstore last week. It jogged a memory I had of reading positive reviews at the time of its publication in 2003. So I finally bought and read the thing.

The book tells two stories, one about the planning and staging of America’s first world’s fair, and the other about the contemporaneous activities of a serial killer. Both stories are set in late 19th-century Chicago, whose population had recently grown past the million-mark, and which was attracting ambitious young people from rural backgrounds with dreams of of big-city lives and careers.

Author Erik Larson researched the heck out of this work, and it is impressive that he was able to find so many documents, meeting reports, news articles and letters more than a century later to piece together such a compelling narrative. 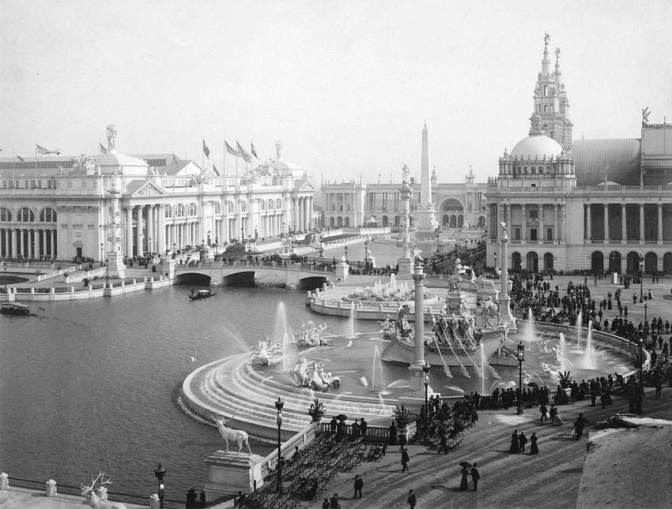 The United States had an historical chip on its shoulder vis a vis Europe, particularly after Paris’ very successful world’s fair of 1889, marked by the opening of the Eiffel Tower. American leaders decided they to mount a similarly big show. New York City’s leaders wanted to host the fair, but Chicago promised a richer package and won the award.

Getting the fair organized, planned and built was huge task with an unrealistically short deadline. The Chicago architectural firm of Burnham and Root was designated to oversee the task, but Root died young in 1991 and Daniel Burnham assumed the master planner job.

Construction was bedeviled by harsh weather and sundry unanticipated setbacks, but the world’s fair site was largely in place by the deadline.

The problems continued when opening crowds were smaller than expected and a worldwide financial panic threatened to cut traffic even more. The worries faded as good word-of-mouth, targeted promotions and a fine new attraction drew growing crowds.

Through it all, Burnham managed the schedule, the details, and the political matters. Larsen’s description paints him as calm, focused and extremely disciplined. The fair’s success owed much to his effort and made his reputation. At the time of his death in 1912, his architecture firm was the world’s largest.

As Burnham organized the world fair, a similarly focused man, a charming doctor and pharmacist, designed and ordered the construction of a building nearby.

H.H. Holmes (one of many names he used) planned to offer hotel rooms to fair tourists above a ground-floor pharmacy.

The building was unusual — weird, even sinister — with elements that Holmes had devised and whose purposes were understood only years later.

During the course of the fair, Holmes lived in his building, apart from his wife and child. He romanced several women who disappeared and whose relatives, living in other states, tried in vain to discover what had happened to them. There were other deaths after the fair. That Holmes was a serial killer is certain; the number of his victims is unknown even today.

Chicago was attracting many new people who moved frequently, changing jobs or neighborhoods. There were not the connections of family, church and neighborhood that had been common in the small towns and rural areas that the newcomers had left. Police had few tools to find the missing, and Holmes was able to avoid suspicion — let alone detection — for years.

“The Devil in White City” tells the the crime and world’s fair narratives in back-and-forth chapters. Although the two stories do not intersect, the construction makes sense. If the book told only the story of the fair, it would be too dry for public taste. The contemporaneous criminal story adds human drama and, with it, a broader description of life in fast-growing Chicago at the end of the 19th century.

This book was very popular, and not surprisingly, its story was sold for development as a feature film.

In 2007, it was reported that director Martin Scorsese and actor Leonardo DiCaprio had joined for the project. Plans were announced for construction of a set resembling at least part of the world’s fair site. DiCaprio was variously reported to have been cast as Burnham, the fair organizer, or Holmes, the serial killer.

Within the last two years, it was announced that the movie would be released in 2017. We’ll see.

In 1885, Austin, Texas, was beset by an unidentified axe murderer who killed at least five women in particularly grisly fashion. This year the mystery got a full workup in “The Midnight Assassin,” by talented Texas writer Skip Hollandsworth, who had been consumed by the story and devoted considerable effort over many years researching the crimes and their effects on the city, its police force and even the state government.

Hollandsworth clearly wanted to name the killer — the author’s personal Moby Dick — and the book leaves the reader with the strong conviction that the writer hasn’t given up his search.