There are many signs that Americans love nature and that available space in nature is getting scarcer every year. If you visit New York’s Central Park on a nice weekend day, you will be lucky to find a spot of grass on which to spread a towel and sit. If you visit Yosemite National Park in California, your quiet interaction with natural beauty will be shared with thousands of other tourists any day of the year.

Also in California, the Muir Woods National Monument is getting so crowded — more than 6,500 visitors some days along the brief and lovely footpath — that the National Park Service is considering an appointment system for parking and visits.

Then there is another variation on the crowding phenomenon. It is the tension that sometimes rises to the level of outright hostility between hikers and mountain bikers.

“One of the places I ride is technically open to hiking,”

said an officer of the American Hiking Society.

“But I would never go there to hike,

because there are too many bikes.”

Last week, a hiker in New Jersey alerted police to some nasty sabotage on a popular hiking and biking path. Here’s part of it. 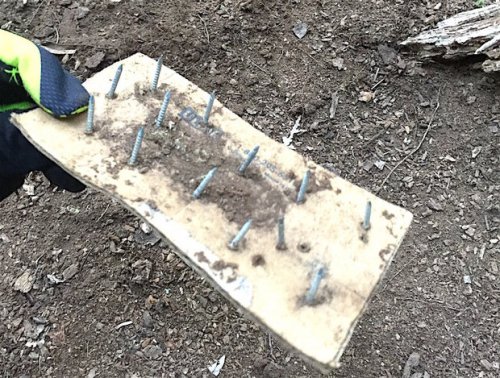 As you can see, it’s a piece of wood fitted out with a bunch of screws leaving sharp ends protruding. It had been covered lightly with dirt and left in the middle of the path. At other points, police found concealed bands of barbed wire and broken bottles, cut side up.

When this was reported in the general press, letter writers assumed that a maniac was on the loose and trying to injure hikers and bikers. But this almost certainly was not the case.

Hikers wear boots, which offer pretty good protection. Mountain bikers, on the other hand, travel on inflated tires than can be punctuated by screws, barbed wire and broken glass.

This sort of thing doesn’t get reported often, but bikers who have been paying attention report similar incidents every year in areas across the United States and Canada. Several years ago, a psychiatrist was caught and prosecuted for rigging a nylon wire to trip mountain bikers along a path in Southern Oregon.

These are all low acts, of course, but they indicate the escalating level of tension between people who hike on nature trails and mountain bikers who use the trails for exhilarating workouts.

Bicycle riding originated more than a century ago as a way to get around on city streets. Over the years, distance bikers took to highways and country roads for long-distance rides and to challenge themselves by adding steep hill roads to their routines.

Sometime in 1970s, according to the lore, bikers in Marin County, north of San Francisco, began using old fat-tired Schwinn single-speed models to test their abilities to climb hilly trails and then to ride down the same paths.

Over time, the Schwinn devotees began tinkering with bike frames, bike brakes, bike gears and newer tires to improve their vehicles’ range and performance. Along the way, the mountain bike (MTB) became a new category of bicycle, and a popular one. It is now estimated that there are at least 8 million MTB enthusiasts in the United States.

The Seeds of Conflict

Hikers who had had the trails to themselves (and the occasional horse) for many generations grew disillusioned with increasing numbers of hiking newbies and, more, with growing numbers of mountain bikers plying the traditional paths.

For their part, MTB enthusiasts also resented sharing trails with slow-moving hikers who impeded their progress by ignoring yells of “On your left!” or bicycle warning bells that once were the province of four-year-old tricycle riders.

Each group — hikers and bikers — perceived its pleasant enjoyment of nature to be diminished by the other. Tensions ran particularly high on narrow, single-track trails that really cannot accommodate pedestrians and bikers moving side by side.

I used to hike pretty regularly and with great pleasure in the Marin Headlands. Most of the MTB bikers seemed to be weekday workers who gathered in groups for weekend rides, at the same time when parents took schoolchildren for fun hikes in nature. I mostly hiked on weekdays and didn’t have much problem.

One thing I did notice was that a shallow, damp trail section was turned into a deep gully over a period of months.

The picture above illustrates some of what happened except that my path was worse. It deteriorated into a two-foot-deep trench with muddy tire tracks in the bottom, and soil erosion and destruction of plant roots along the sides. (Since then, many managers of public lands have put up signs closing such trails when conditions are wet, a sensible move.)

In addition, the established hiking community observed other trail damage that was traced to mountain biking. This led to tut-tutting news reports like the one below from North Carolina.

This naturally irritated biking groups, which had become organized over time. Spokesmen for such groups insisted that bikers were much more likely to volunteer to work on trail maintenance projects than hikers ever had been. Experienced MTB riders said they taught newcomers the etiquette of trail respect.

One public action, taken in many locations, was to segregate trials as “hiking only” or “biking only.” This made some sense, but it limited the availability of biking trails overall. The response of some bikers was to construct new trails in public or privately held wild areas. Again, the biking organizations protested that only a few bad apples were to blame for these intrusions. Meanwhile, hikers and bikers were dismayed as naturalists lobbied to make more and more areas off-limits to all in the interest of protecting pristine nature from human depredation.

When you crowd growing populations of disparate outdoor enthusiasts into smaller and smaller spaces, what you get is tension. No surprise there.

As the performance capacities of mountain bikes were improved by the applications of physics principles and better mechanics, bike companies began promoting their products by showing the daredevil deeds that skilled riders could accomplish with their new models. The downside, to traditional mountain bikers, was a changing image of mountain biking from a wholesome outdoor pursuit into an extreme sport.

Stronger brakes particularly allowed for “downhilling,” speedy rides down treacherously steep hillsides. The video below shows some of the romance and thrill of downhilling.

To be fair, these riders seem to be challenging themselves on private courses, not public lands.

The evolution here may be something like that of snowboarding, which started as something new and cool and then, in certain groups, became tests of virtuosity and death-defying derring-do.

MTB magazines and websites argue that 90 percent to 99.9 percent of mountain bikers do not participate in these activities. The group leaders insist that manufacturers’ video demos have given a false image of the sport, or the recreational activity, whichever it is.

It is pretty clear that mountain biking appeals to different people than traditional hiking does.

Hikers, who have been with us forever, take pleasure in quiet jaunts. Some march briskly up steep hills and cover long distances. Some saunter. Some carry binoculars and stop to look at birds. It’s a diverse community but with general things in common.

Mountain bikers thrill to speed and the wind whistling past them as they whisk along trails or, if their tires allow, across banks of rocks and open country. They relish the freedom from competition with motorized vehicles on public roads.

Both groups prefer not to share trails. The hikers fear confrontations with speeding bikers, and the bikers resent having to slow down every time they pass pokey hikers.

I don’t think this conflict ever will be resolved.

All the foregoing makes me think of a song from the Rodgers and Hammerstein musical, “Oklahoma.”

The song is melodic and the sentiment is nice, but the fact is that such harmony was never the rule in the homesteading era. Generally the two groups were more like the Hatfields and McCoys.

On a final, more upbeat note, I will mention that there is one matter on which hikers and bikers agree: Both groups loathe motorized dirt bikes and other off-road vehicles.