Reprising “Stories from the Flu Pandemic,” an Idiosyncratist post from 2014

In the fall of 1918, a flu pandemic swept the world.  In the United States, an estimated 25 percent of the population fell sick and 675,000 people died.

Curiously, the youngest were among the most vulnerable, particularly young adults.  Older Americans seemed to have acquired a certain immunity during an earlier flu season before the turn of the century.

In 1918, doctors believed the flu was a bacterial infection.  In fact, it was a virus, but viruses were little understood at the time.  The distinction made no difference: There were no medicines in 1918 to treat infections of either kind.  Treatment consisted of rest, aspirin and patent medicines.

People retreated to their homes.  Public gatherings were cancelled, many schools were closed and church attendance stopped for several months.  Cities including San Francisco required everyone to wear gauze masks in public and jailed those who did not wear such masks.  In retrospect it was revealed that gauze masks offered little if any protection.

There are a few oral history sources of people’s memories of the 1918 flu.  I culled the quotes below from flu.gov and historymatters.gmu.edu.  They are lightly edited but intact in substance.

From Pennsylvania:
— “My grandmother had a separate room curtained off when seven of their children got sick with the pandemic flu.  When she entered the room, she wore gauze over her nose and mouth.  Of the seven children that got sick, four of them died . . . . My aunt said that she knew when one of them was not going to live because her mother would sit with the child in the family’s rocking chair and sing to him/her.  The rocking chair would creak and when it stopped, she knew they were gone.”
From Missouri:

— A younger daughter stayed home in December 1918 when her parents and older siblings went for a sleigh ride.  Afterward, “all four children caught the flu; all four died within one week.  It was so cold they put the bodies outside.  Before he died, one of the boys said to ‘just put me outside, I will join the others in a few days.'”

— “My grandfather William, a merchant, met his wife Lily at a church gathering.  They had five children, three boys and two girls.  William registered for the draft but was not called to serve.  His business was very prosperous and became more so when the flu epidemic began — due to increased demands for his livery (taxi) service.  As soldiers returned home with the flu, William picked them up from the train station.  As the numbers of flu stricken soldiers grew, he stopped charging for this service.
“Sadly William contracted the flu and died in January 1919 at the age of 38.  Lily never remarried and life was very hard for the widowed mother and their children.”

From Kentucky, a 95-year-old coal miner’s memories:
“And every, nearly every porch that I’d look at had — would have a casket box sittin’ on it.  Men were a diggin’ graves just as hard as they could and the mines had to shut down there wasn’t nary a man, there wasn’t a mine arunnin’ a lump of coal or runnin’ no work.  Stayed that way for about six weeks.” 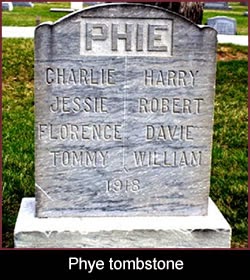 — Above is the burial site of an entire family lost:  two parents and their children aged 19, 16, 10, 8 and 4 years old.  (The family name was misspelled on the tombstone.)

Nurse Carla R. Morrisey wrote an article, “The Influenza Epidemic of 1918,” that is part of the Navy Department Library.  In it, she recalls what she was told by her great aunt, also a nurse, of caring for sick sailors at the Great Lakes Naval Training Center in Illinois.  Here are some excerpts:

“With a room of 42 beds and twice that many sick sailors, Josie often worked 18 hours a day. ‘As the boys were brought in we would put winding sheets on them even if they weren’t dead.  You would always leave the left big toe exposed and tag it with the boy’s name, rank and next of kin.’ As one boy lay dying in bed, one waited on a stretcher on the floor for the bed to empty.  Each morning as the ambulance drivers would bring in more sick boys they would carry the dead bodies out.   Josie often said she felt sorry for the poor boy on the bottom. . . . As the weeks dragged on the truck loads of caskets left daily for the train station to destinations listed on the ‘tag’ as next of kin.

“Nursing was nine-tenths of the battle in recovering from influenza.  Since there were only palliatives for the flu and pneumonia it developed into, doctors were not the essential ingredient in fighting the disease . . . . Josie would work endless hours trying to relieve the high fevers and nosebleeds before the lungs filled with blood and face turned blue.”

There have been many advances in medical treatment since 1918.  Vaccines and retroviral medicines have taken most of the sting out the flu.  Polio vaccinations, developed in the early 1950s, eradicated a childhood disease that killed thousands and paralyzed many thousands more in the United States, including an American president.  Worldwide, polio has been defeated almost everywhere.

On the whole, we are much healthier than people in 1918, but other challenges — malaria, chikungunya, Ebola, Lyme disease — are with us.  With time, new diseases are sure to arise.

A description of the spread of the 1918 flu, which is believed to have arisen in the U.S.  From 1914 on, World War I had occasioned movements and interactions of soldiers from many continents — more than any previous event in human history.   An unexpected effect was the international spread of a deadly flu virus.