This film won the Best Picture and Best Director prizes at yesterday’s Golden Globes awards ceremony.  It will go into wide release — will be shown at many more theaters — this Friday.  It is handsome, handsomely done and should draw large audiences.

The story is set in France in the year of its title.  It is about two British soldiers struggling to obey an urgent order.  Except for one possible problem noted at the end of this piece, 1917 works very well.

The two soldiers — Blake (Dean-Charles Chapman) and Schofield (George MacKay) — are called to meet their general, who explains that a 1,600-man British battalion will be “drawn into a massacre” if it follows through on a planned attack the next morning.  Air reconnaissance has established that German forces are massed and ready to defeat the action, and severed phone wires have made it impossible to notify the battalion commander.

The only way to order the attack’s cancellation is by messenger.  Blake, whose older brother is a lieutenant (leftenant in Englishese) in the doomed battalion, seems to have been tapped for the job because of his family connection, and he has tapped the less optimistic Schofield to join him.

General Erinmore (Colin Firth) entrusts Blake and Schofield with written orders to cancel the attack.  He tells them to proceed on foot to deliver the orders within 20 hours and tells them that they will meet no resistance en route.

Schofield, who has seen too much, suggests waiting for nightfall to set out, but Blake resists.  “It’s not your brother, is it?” And so the two lance corporals set off.

They leave their trench encampment and trudge across a muddy no-man’s land marked by shell craters and corpses, then through abandoned and booby-trapped German trenches, then past a cherry orchard of felled trees (whose blossoms establish that the season here is spring) and then into the remains of a bombed-out town.

And, despite the general’s assurances, Blake and Schofield meet up with trouble, lots of it, as they pursue their goal.  So it goes.

Technically, the story spools out in an unusual way, following Blake and Schofield’s movements in a seemingly unbroken shot — actually many scenes edited to feel like a continuous observation of their journey, as if the audience is there for every step.  This unusual assembly is off-putting to some, but it works well here.

This film seems to have held personal meaning for its cowriter and director, Englishman Sam Mendes, whose credits include American Beauty, Skyfall and Revolutionary Road.

The movie’s last frames acknowledge Mendes’ conversations with his grandfather as the inspiration for 2017.  The grandfather, a WWI veteran, was tasked as a “runner” who delivered messages between British units during that war.

Mendes studied literature at Cambridge, and presumably some history as well.  While this movie is compared often with Steven Spielberg’s Saving Private Ryan, its story seems to have at least a couple actual historical antecedents as well.

— 1917 is set in France in the spring following the Battle of the Somme, a four-month horror that ended in late 2016.  After that battle, the German forces retreated behind what was called the Hindenburg Line, outlined in the map below, presumably to areas that could be defended more efficiently and with less manpower.
It is likely not a coincidence that the movie deals with a German tactical retreat. 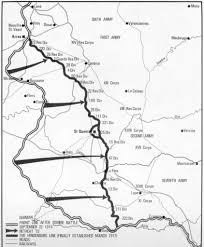 — The film’s idea that the Germans have retreated strategically calls to mind Napoleon’s famous feint in the 1805 Battle of Austerlitz.  In that situation, the French emperor pulled back his troops along one front, effectively inviting the Russo-Austrian Army to advance in a direction where French forces were positioned to crush the enemy as it moved.
In the movie, the general believes that the retreating Germans have set a trap for British forces by retreating and then daring the Allies to mount an attack that will be crushed.

This viewer’s reservation about 1917 is that it seems to have a largish plot hole.  Consider the general who sends two lance corporals out with information that, if delivered, will save as many as 1,600 lives.  Given the high stakes involved, why didn’t the general send five teams out to deliver the same message, just in case Blake and Schofield were unable to reach their destination?  Why didn’t he dispatch the troop truck that meets up with the team on their long walk?  Why didn’t he order the reconnaissance planes that spotted the German force buildup to go back up and drop cancellation orders over the endangered battalion’s bivouac?

Much smaller questions than these keep me awake at night.  Why not that general?

The Idiosyncratist noted the centennials of World War I’s beginning  and its end.

Another good film about the war, They Shall Not Grow Old ,was released in the U.S. earlier this year.  It features restored film and quotes from the period. It now is available for home viewing.