Commentary from our columnist on news from Windsor Castle to Gotham to Los Angeles’ own USC.

Oy, feh, those Royals are at it again. All iberkern they are because Prince Harry and his pregnant soap-opera wife, Meghan Markle, have announced that the new baby’s godfather will be Mark Dyer,  Harry’s real father. Of course, everybody already knew that Prince Charles was not Harry’s real foter, because he doesn’t have the family schnozz like William and the seide (Prince Philip).

Meanwhile, the Queen, who knows from nothing, waddles around the daffodils with her corgi dogs and spends the rest of the day in the castle sipping tea and counting her ducats. She should live to a hundred and twenty.

And then there’s Regis Philbin. He’s another nudnick up in years who’s older than Methuselah. For the kids who don’t know the Methuselah, think of Morey Amsterdam. Is he still alive? (Ed. note:  Mr. Amsterdam died at 88 in 1996.) Anyway, Regis has the bad heart and could drop dead any minute, and he wants to make amends for quitting his talk show without telling his cohost Kelly Ripa.  But eight years later, his calls she’s still not taking.

Two actresses were arrested in that big scam about the parents who were bribing colleges to take their narisch kids. One is Felicity Huffman. She was in the “Desperate Housewives,” the TV show about the scheming yentas who hated each other – on and off the camera. The other one was Lori Loughlin, who played the nice girl on “Full House” and the Tess Trueheart types on those Lifetime Movies. Meanwhile, she’s married to this character Mossimo Giannulli, who’s made billions of dollars selling schlock T-shirts, and nobody has the beitzim to utter the word “mafioso”?

They ought to lock up all three of them and dump them in a turme like “Orange is the New Black.”

Beitzim is the Hebrew word for “eggs.”  In Israel, as in this column, it seems to be the  vernacular equivalent of cojones in Spanish and balls in English.

Iberkern means “upset.”  Grandma is polite enough not to overgeneralize, and so we can only guess whether the Windsors’ worry is bissel (a little) or zeyer (rather a lot.)

Narisch is a German word that translates roughly as “crazy.”  In Yiddish, narischkeit means nonsense.  (Ed: I’d use stronger language to describe the parental behavior in the Varsity Blues matter and also the narisch daughters’ explanations, which amounted to, “Gee, I’d never have done that if I thought I’d get caught.”)

Nudnick is a handy word for describing a boring pest.

Grandma regularly drops unusual tidbits into her posts.  In this one, she raises the possibility, perhaps known to all but me, that Prince Harry may not be Prince Charles’ son.    Curious, but who knows? 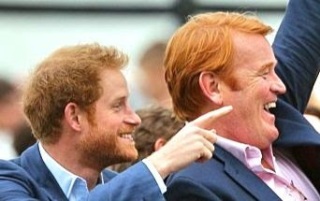 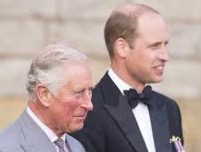