This latest Star-Is-Born movie (more about the others later) is, by my lights, the best of the bunch.

The story is well known by now:  An ambitious but obscure young woman is observed by a very successful older male star who drinks too much and whose career has peaked.  They marry, he promotes her rise as his own career declines and there is a bittersweet ending.

What distinguishes this version is character development.  The established star, Jackson Maine (Bradley Cooper) cares deeply about music and songwriting.  He has a backstory that explains this and gives some context to his alcohol abuse and his contentious relationship with his much older brother and manager, Bobby (Sam Elliott.)

The action gets going one night when, after a concert, Jackson stops at a drag bar for a drink and hears waitress-by-day Ally (Lady Gaga) sing “La Vie en Rose.”   They talk for while and recognize that they have a shared interest.

“I think you might be a songwriter,” he observes, and in fact she is.  He admires her work and pulls her onstage to perform at his next mega-concert.  Ally, reluctant at first, sings one of her compositions to an arrangement that Jackson has prepared especially for the moment.  From there her career and their relationship take off.

Eventually Ally gets an agent, Rez (Rafi Gavron,) who promotes not just her music but Ally! — a star with a new orange hairdo and flashy dance numbers.  This redirection from pure music, together with Jackson’s personal problems, cause stress in their marriage.  And so it goes.

In addition to acting in this movie, Cooper co-wrote the script, and directed and produced the piece  The more-nuanced-than-usual plot plays to his strength — he’s been nominated for three acting Oscars — and gives first-time actress Gaga support while her singing and her character’s career trajectory balance her end of the story.   It works well.

“What Price Hollywood,” a 1932 film directed by George Cukor is the story of a waitress who catches the eye of a bibulous film director.  He helps her become a star as his own life spirals downward.

This film is the template for the four subsequent “Star Is Born” movies.   Some are better than others, and each in its way reflects the moment in which it was made. 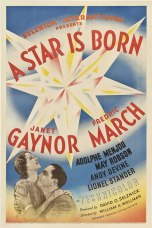 The 1937 version of “A Star Is Born” is about Esther Blodgett (Janet Gaynor,) a naive young woman who lives on a farm in North Dakota and wants to be a movie star.  Her granny dips into savings to send Esther to Hollywood, where, after much disappointment, she meets a handsome movie star, Norman Maine (Fredric March,) whose “work interferes with his drinking.”

Maine courts Esther and promotes her to his studio, first getting her a small part and then a starring role.  The studio pros rename her Vicki Lester, her career takes off and the two marry.

The love of a good woman straightens Maine out — they drink milk at dinner — but he loses his studio contract and slips back into his old habit.

Like “What Price Hollywood,” the film depicts a glamorous industry that must have appealed to a country mired in the Depression.  Scenes are set in the film studio, at the Cocoanut Grove nightclub, at the see-and-be-seen Ambassador Hotel swimming pool, as well as (then) Grauman’s Chinese Theater and Sunset Boulevard’s Walk of Fame.

The 1954 version of “A Star Is Born,” resembles the 1937 in almost every detail, but with music.   Esther Blodgett is played by actress/singer Judy Garland.

As before, Norman Maine (James Mason) has a drinking problem, but Esther Blodget/VickiLester (Judy Garland) likes the guy.  “Drunk or not, he’s nice,” she observes.

They become a couple as he promotes her career and then marry.  Her rise and his decline proceed apace, punctuated with some great musical numbers typical of the era, most notably “The Man That Got Away.”

“A Star Is Born” was revived again in 1976 with a plot updated for the rock and roll era.  It has a notably dissolute star, John Norman Howard (Kris Kristofferson,) who meets Esther Hoffman (Barbra Streisand) in a coffee house where drinking is banned, darn it, after a big stadium concert.

Inexplicably, the two take to each other, and he promotes her music, which is nothing like his own.  The movie pairs an intensely focused Streisand with an amiable Kristofferson stumbling, falling, drinking and snorting cocaine, which may reflect the actors’ relative personalities and levels of ambition.

The story parallels its predecessors, but the whole thing is a mess.  This may be why nobody wanted to make another star-is-born movie for the next 40 years.

Viewed with 2018 eyes, these movies present some interesting male-female dynamics.

All the films feature a man whose career declines as he helps his wife’s career explode.  Not one of the movies speculates out loud that the man feels himself reduced as a man by his diminished status.

In the last three films, the female roles — obscure women who triumph — are played by already-famous stars.  Before her 1954 performance, Judy Garland had established herself as a singer and acted in 30 films, including “The Wizard of Oz.”  Barbra Streisand had appeared in nine films and recorded 20 popular albums.  Lady Gaga’s pop music was so popular that she was the halftime star in the 2017 (LI) Super Bowl.

I don’t know what if anything to make of all this, but we talk a lot about the patriarchy these days.  These stories and their players don’t quite fit the narrative.

“I just wanted to look at you again,”  is a line that Norman Maine says twice in the 1937 film — first as his relationship with Esther is developing and then toward the end.

It’s a simple and moving way of bracketing the plot arc.  Not surprisingly, it was picked up and used in all three subsequent movies.