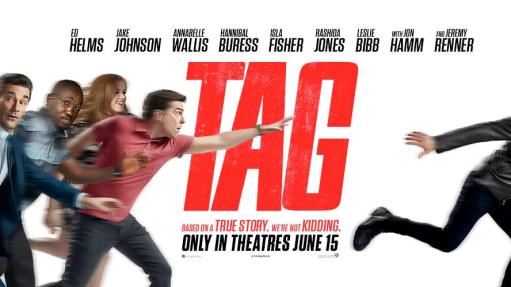 “TAG,” you may have read, is a movie about five middle-aged men who keep their group friendship alive by playing tag, the kids’ game, for one month every year.

The idea for the film came from a newspaper story about a similar situation.  The article describes men going to some lengths to waylay and tag their fellows.  They are particularly anxious not to be “it” at the the end of the month of play and for the next 11 months until the game resumes.

“TAG” includes the usual hijinks, a remarkable amount of property damage and a shoehorned-in moment of pathos — or is it? — toward the end.  Its dialogue also is full “fucks” and dick jokes, which guarantee an R-rating, now standard for adult comedies. These elements fight for attention with the theoretical heart of the story — men in their 40s who remain devoted to school classmates.

It is likely the added elements are not consistent with the source material.  Of the 10 men in the original article, one is a Catholic priest and two others teach and coach at their alma mater, a Jesuit school.  I’m guessing the real tag players’ conversations are less colorful than what’s offered here.

In short, the movie is fun, but juvenile.  When I saw it, the audience was young and included a number of viewers appeared to be under the age of 17, officially too young to see it without their parents.  I doubt they were traumatized by the experience.

Over the last 20 years, an R-rating has become the standard for funny movies aimed at adults — everything from Judd Apatow’s output to the Hangover movies to the Deadpool franchise.

Today, virtually all PG-rated comedies are children’s movies, and even they often have mild epithets like “damn” and “bitch” and twerking animals wearing mankinis.

Meanwhile, perhaps the most enduring comedy of the last 25 years is “Groundhog Day.”  Here is a nice Variety piece assessing its significance and an interview with its screenwriter.

“Groundhog Day,” a PG film whose plot was unlike any seen before, was a difficult sell with producers in 1993.  If it were made today, it certainly would require the addition of multiple fucks, tits and dicks to satisfy expectations of current audiences.

One thought on “MovieMonday: TAG”