(Again, this post has normal formatting in its draft form but not when published.   For better spacing find it here on the main idiosyncratist site.)
This afternoon I walked out on an errand in my Santa Monica/Venice neighborhood in Southern California.  It’s a nice location, not far from the beach.
Within two blocks, I saw the following.
1. A bicycle chained to a street rack.  Only the frame remained.  Thieves had taken the wheels, saddle, handlebars, brakes, chain, derailleur and pedals. 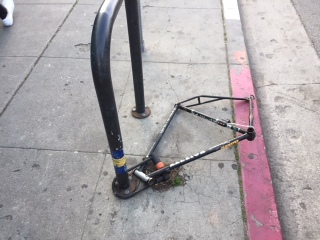 2.  Another bicycle chained to a street rack.  This was a less desirable bike, apparently, because the thieves had taken only the wheels and tires.

3.  Yet another naked bicycle frame.

Bicycle theft is an entrepreneurial thing with certain members of the homeless communities in Southern California.

I turned at the corner and, one block later, I came upon this:  A dozen or more bicycle wheels and tires, and other assorted parts, plus several bicycle frames.  All were chained securely to a metal traffic sign post. 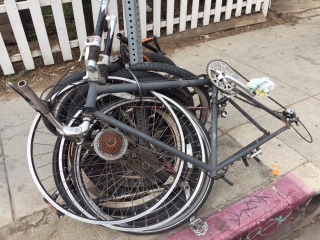 My best guess was that some bicycle thief, or group of thieves, had stashed their most recent haul in plain sight to be picked up later.
In an effort to be helpful, I phoned the local police precinct. I figured the police could collect  the stray parts and, if their true owners could not be found, could discard the lot.  If this were done on a regular basis, I reasoned, it might discourage thievery.
Alas, it was not to be.
On my first call, I was directed, in English and Spanish, to hang up and call 911 if my situation were an emergency (which it was not) or to wait to talk to a police employee.
I decided to wait.  The phone rang and rang and rang.  After five minutes of waiting with no answer and as my cell battery started wearing down, I hung up and continued on my errand.
A few blocks on, I passed this.  I believe a homeless person had liberated a shopping cart and chained it to another traffic sign post in order to keep someone else from taking it.  (Other local denizens convey their goods in baby strollers, which I do not think are purchased at the Caro Bambino store on Main Street.)

But I digress.
When I got home, I phoned the precinct again.  This time the line was busy; an automated voice told me to call later and then hung up on me.
A few minutes later I called a third time.  The phone rang and rang and rang again.  I put the line on speaker and did some household chores.  After a long time, I gave up and hung up the phone.
This was probably just as well.
The police here take homelessness as a given. They seem more hostile than helpful in dealings with the street population, but they don’t seem concerned with misdemeanors.  Smoking methamphetamine on the sidewalk in front of boutique, which I observed on a midday stroll last week, no longer raises an eyebrow among pedestrians, let alone the police.
Homelessness
There have been homeless people near the beach for 40 years or more, but locals seem convinced that the numbers have increased in recent years.
The face of homelessness in this neighborhood is young, able-bodied white guys.  On occasions when I have talked with them, they have seemed reasonably well educated.  Yes, they want cash or your doggie bag from the restaurant, but they are mostly rational, at least when they are not drunk or high.
Honestly, this seems anomalous at a time when national unemployment is at its lowest level in 18 years, a situation that economists describe as full employment.
—–
Below is a much-watched 2017 video tour of homeless encampments along an Orange County bike path.  The bicyclist who comments on the tour said recently that he regretted what he said — at least the tone of what he said — but his observations are distressing: bicycle chop shops, people tweaking (using meth) in the open air, children living in tents.
The camp was cleared a few weeks ago for an infrastructure project, and a judge ordered the city to house all the campers in motels for some period.  Newspaper reports quoted one woman who had lived there for 12 years, and clearly many other people were long-time residents as well.
This puzzles me.  Twelve years is a long time.  It’s long enough to enroll in college and to earn a BA, an MA and a PhD.  It’s long enough to get a job and save enough money to move someplace where rents are much less expensive than in Southern California.
This tent city is not the only one.  There are others along streets in downtown Los Angeles and under freeway bridges across the area. Tent hamlets spring up overnight in various neighborhoods and then relocate, sometimes after weeks and other times after years (a topic for a future post.)  As many as 75,000 people are believed to be living rough in Los Angeles and Orange counties.
—–
The term “homelessness” is singularly unhelpful because it encompasses a variety of situations and individual people with problems that are unique to each one them.  Governments here address homelessness with “services” that may be well-intentioned but which treat the homeless as an undifferentiated mass.  Not surprisingly, these programs have almost no effect.
More about this later.