First came the Zipcar.  Then there were the unfortunate hoverboards.

This fall, a new variety of small motorized vehicle began to appear on the streets of Santa Monica and West Los Angeles.  Behold the Bird Scooter. 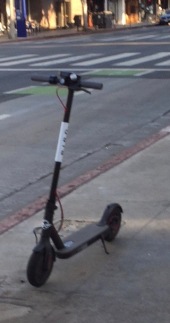 These resemble those Razor scooters that were a thing about 15 years ago, but Bird Scooters move along on their own.  Riders don’t need to push with their legs to make them go.

Bird scooters are designed for very short rentals — $1 a ride plus 15 cents a minute.  Most people use them for a mile or two.  With a top speed of 15 mph, they’re relatively zippy. So far, they’re pretty popular.

Here are a few Iphone photos I took over the course of five minutes near the beach boardwalk in Santa Monica the other day.  (There were more riders and more pictures, but the pictures were too fuzzy.) 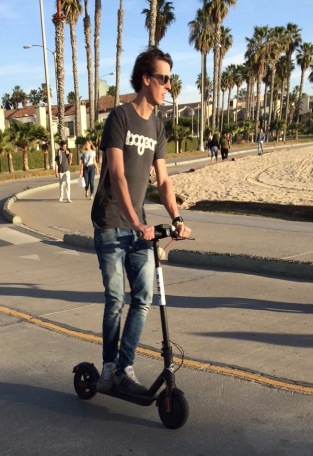 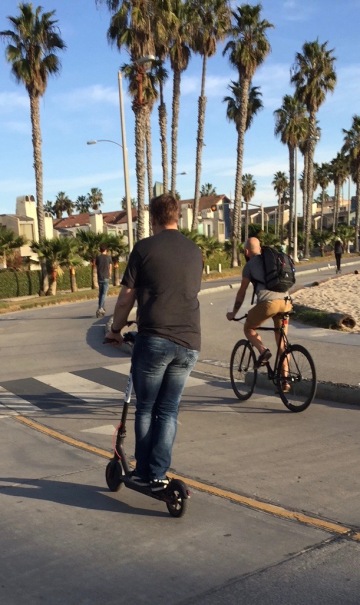 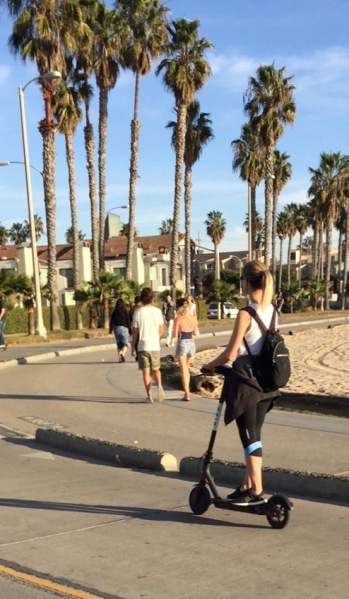 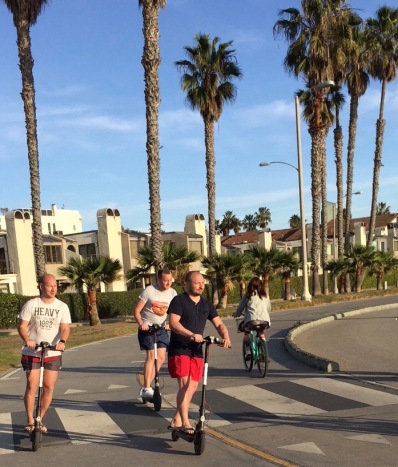 Bird riders seem mostly to be millennials and tourists having some fun, but the company’s thesis is that it provides “last mile” transportation, which makes some sense.  Santa Monica  is the terminus of a light-rail line that runs from downtown LA, and parking can be difficult to find in the city’s commercial neighborhoods.  With a Bird, you can get off the train or park somewhere convenient and then zip by scooter for an appointment or to meet friends.

The founder of the company is, not surprisingly, a guy who used to work at Uber, another app-based service that was conceived as an alternative to arguably over-regulated and under-responsive taxi arrangements in cities around the world.

You may be seeing Birds scooting around your town eventually.  Like Uber, the company aims to expand.

Also like Uber, Bird has attracted the not entirely enthusiastic support of city officials in its hometown.

Mostly the complaints come from the Santa Monica Police Department. The main ones:

— After reaching their destinations, Bird scooter riders leave their Birds on sidewalks, usually near newspaper boxes or buildings. I haven’t seen gobs of scooters blocking pedestrian traffic yet, but conceivably that could happen.

— Bird scooter riders are traveling on sidewalks when all motorized vehicles are required to travel on the streets.

— The Bird scooter company isn’t checking that every rider has a driver’s license, which is required to operate any motorized vehicle.

Honestly, I’m not sure why the fuss. Most bicyclists don’t wear helmets here, and there was never any noise about helmets, drivers’ licenses or sidewalk-only restrictions back in the hoverboard day. The scooters-crowding-the-sidewalk thing could be left to the Bird people, who keep track of scooter locations and have an incentive to make sure Birds are available at various spots around town.

For now, the police are being generous.  They are stopping Bird scooter riders and issuing stern warnings:  Obey the law, or expect fines of up $190.

The fines may be the point.  In Southern California, law enforcement is pretty darn scarce. Response time is more than 33 minutes for the very few 911 calls to which the SMPD chooses to respond.  Many stores have private security guards, and the Whole Foods has two guards and sometimes three.  Police are most commonly observed issuing traffic citations and jaywalking tickets, all out of concern for public safety.

If the local constabulary decides to make a priority of regulating dangerous scooter traffic, I think I have a better idea:  Leave those Birds alone.