If you’ve only spent a day or two in Nashville, your impression of its music scene probably was formed by the loud bands that play in honky tonks on lower Broadway.
But if you spend even a little more time in the city, you realize how embedded music is in the local culture.  In a sense, music is a language unto itself, and in Nashville, everyone is fluent in that language.
–You go to a doctor and finding yourself discussing the relative challenges of playing syncopated Scott Joplin rags and Beethoven’s moody Moonlight Sonata.
–You go to the gym and one of your swimming friends invites you to come watch her play bassoon at her community orchestra’s performance of Rachmaninoff’s second piano concerto.
–Another gym friend shares pictures of his new grandson and then gives you his indie CD in which he is the solo singer backed up by a Nashville band.  Then he has to say goodby because a well-known local artist wants to tell your friend how much HE enjoyed the music.
–You go to the airport, and there’s a platform for group performances.  You go to a hockey game, and a live band plays classic rock between the periods.
In short, the place is shot through with music.
Library
A couple weeks ago, I was in the downtown library and heard music coming from the courtyard.  When I went to investigate, I found this.

This group was practicing for the library’s entry in the annual Christmas parade.  There were marchers in Santa hats, big puppet images of Mark Twain and Maya Angelou (Beatrix Potter and a Cat in the Hat were on the sides), and a large African American man was carrying a big soft Elvis Presley figurine.  The music, of course, was “Blue Christmas.”
A week later, I stopped at the library and found a string group playing Christmas carols in the balcony over the entry hall.  I counted 12 dulcimers, a violin, a guitar and a double bass.
In the fall months, the library’s courtyard hosted noontime concerts of jazz, rockabilly, folk and soul music, as well as a program by a tribute band called the WannaBeatles.
Music Shops
A cell biologist we know took us around one day when he was visiting family in Nashville, his home town.
He’s a guitarist, so we went to the two high-end vintage guitar stores, where he talked with his longtime friends, the owners.
At Gruhn Guitars, we were invited up to the second floor, where famous musicians are invited for coffee or to jam and where a half dozen guitar repair experts were working on instruments from a large vintage collection that had been bequeathed to a local university.  (Every college and university, and there are a bunch here, has a music department and/or a business division devoted to performance art.) 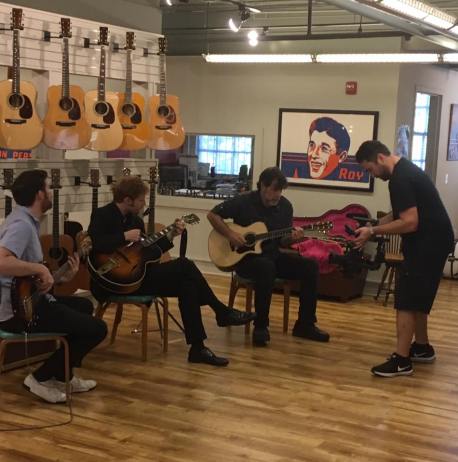 While we were there, we talked with George Gruhn, a genuine polymath who wrote the definitive book about vintage guitars.  After a while, he pulled out an acoustic guitar and taught me a few chords; he urged me strongly to take up the instrument.   He wasn’t trying to sell lessons or a guitar — his point was, why wouldn’t you want to play another instrument?
At Carter Vintage Guitars we found folk guitars, bass guitars, electric guitars, double-necked guitars, steel guitars, banjos, mandolins and amps.  Co-owner Walter Carter writes extensively about music, and so I picked up a copy of his most recent book, “The Mandolin in America.”  A nice read. 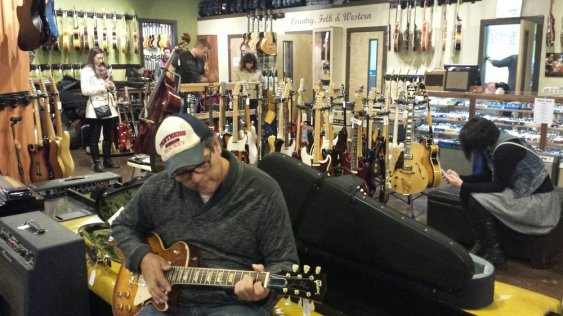 There are at least six other guitar stores in Nashville, also a violin store and a drum store.  I don’t know where to find the keyboard and horn stores yet.
Plus, on 7th Street downtown, is the world headquarters of the Barbershop Harmony Society; its website has a 35-page list of affiliates, mostly in the US, but also around the world.  A cappella has been surging in recent years, and apparently so has barbershop.
Performance
Obviously, Nashville has more places than country-western bars to hear music.  Two of the main ones are the Ryman, an old church repurposed for audiences of 2,000 or so and busy just about every night of every week; and the Bridgestone Arena, where big, big stars — lately Jay-Z and Garth Brooks — entertain many thousands.
One remarkable spot is the Schermerhorn, home to the Nashville Symphony and Chorus.  We’ve been there four times this fall to hear everything from Shostakovich to a bang-up performance of the little-heard “Creation” oratorio by Joseph Haydn.  (See below.)
What I find remarkable about the Schermerhorn is that it draws a much broader audience than the senior-citizen demographic that dominates just about every other classical venue in the country.  There are families with children, millennials on dates (if that’s what they’re called now), groups of friends and people of all ethnic backgrounds.
The symphony courts these groups with $15 children’s concerts, free chamber concerts, pops events, programs like November’s “Music of Prince” performance and regular post-concert discussions with musicians in the back of the hall.  Other cities’ orchestras could take a lesson here.
—–
These things build on each other.   An area with a big music industry attracts others — a guitar player from Germany, a drummer from Maine, a songwriter from California, students to local colleges.  They form a large pool of teachers for young students.  They organize young people’s recitals and choirs.  They marry each other and share music with their children.  After several generations, the effect is remarkable.
If you meet someone who was raised in Nashville and you want to start a conversation, say this:  What musical instrument did you play when you were in school?  This always gets an interesting answer.
Note
Handel’s “Creation” is a musical version of the Genesis story, flavored a bit with Enlightenment themes from the composer’s era.  I had never heard it before, but it seems to be having a revival in recent years — and deservedly so.  The music is beautiful throughout.  Here, from a 2015 London performance, is part of the Adam and Eve duet from the third act.