Here are some famous European paintings. 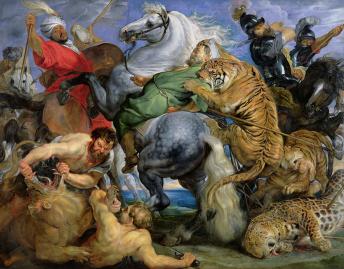 And here is an advertisement that ran on at least one billboard in Paris this spring. Do you see some similarities? 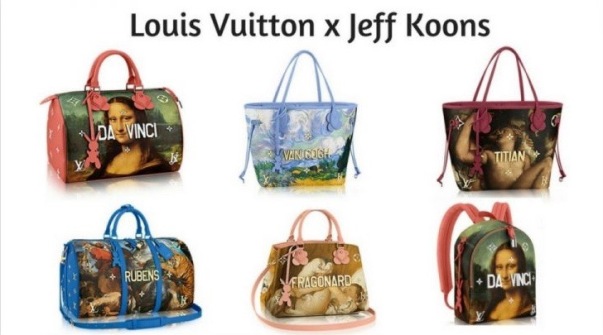 These handbags are not subtle: In addition to gold plates naming the original artists of the featured designs, they have LV logos for the fashion house and cute little bunny-shaped bag charms, the emblem of Jeff Koons, the artist who collaborated with Vuitton on the collection.

The new bags were dreamed up by LVMH CEO Bernard Arnault and his daughter, who know the artist and have bought some of his work. They discussed the idea, called the Masters Collection, with Koons during a lunch meeting.

What are we to make of this?

If you have heard of this artist, it is probably because of his balloon dogs. 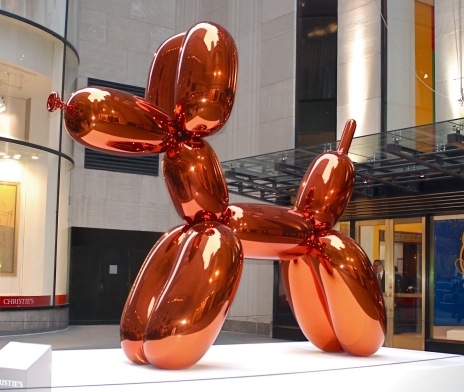 Above is Balloon Dog (Orange), one of several great big stainless steel likenesses of the sorts of prizes children used to get at carnivals or birthday parties. This one holds the record for the highest price ever paid for an artwork by a living artist — $54.8 million.

A few years ago, I saw a Koons retrospective at the Whitney in New York. The show featured many works made over many years, but the one that got the most attention by far was the balloon dog.

I attended the exhibit with a young friend who is a serious artist in the Cy Twombly mode. When I asked his reaction, he said, diplomatically, “I think the artist is having a little bit of fun with his investors.”

And what’s not to like? You see a balloon dog, and you know what it is. It is shiny and perfectly made. It may remind you of a happy moment in your childhood.

Since then, Koons has moved on. In recent years, he has been creating his Gazing Ball series, which consists of large large copies of classical paintings and statues that have blue reflective balls attached. Here is one.

Not everyone is enchanted with the concept. Koons has had a good long career, but among art cognoscenti, skepticism has been growing over time. Here is a reaction to a Los Angeles showing of the recent stuff:

“Koons appropriated famous artworks, had them repainted in oil on canvas, and affixed a gazing ball — a blue glass globe with a highly reflective finish — on each. ‘This experience is about you,’ Koons has said, ‘your desires, your interests, your participation, your relationship with this image.’ Similarly, if there is lasting interest in … Koons’s new projects, it will derive from the moment they reflect rather than any quality inherent in the art itself.”

I don’t know what to make of that, but you definitely can see how the Gazing Ball series led to the Louis Vuitton Masters collection.

In October, a new set of art-themed bags was released.

I’m not the first person to observe that these bags look like the sort of thing you’d find in a museum shop. They’re pretentious and derivative. If I were the sort of person who spent $3,000 or more on handbags, I wouldn’t buy one.

In fact, this isn’t the first Koons handbag. Back in the peak balloon dog years, the artist partnered with the fast-fashion H&M chain, which but balloon dog replicas in its shop windows and sold balloon dog handbags priced at $50. Here is one. 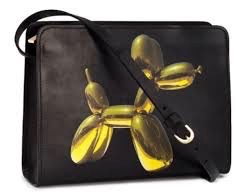 If I had a personal wayback machine, I’d take one of these and a new LV Mona Lisa bag and pay a call on Leonardo. I’d ask what he thought of the use — call it cultural appropriation — of his work for a commercial venture.

I’m guessing the painter would be amused to hear that Koons once threatened to sue a company for making balloon dog bookends — as if Koons himself had copyrighted the idea of balloon animals. My bet is the conversation would be full of mirth.

“The issue here is not exactly a mystery. On one hand, Vuitton is exploiting art for its own gain. On the other, an artist is selling out. In the middle, consumers are being introduced to great art as if it is disposable.

“In part to counter this, Vuitton and Mr. Koons have added a subnarrative to the project that spins it as an effort to address the falling profile of classical art — a civic service, if you will. Inside each bag, for example, is a little description of the artist, like a hidden history lesson for the Twitter generation.”