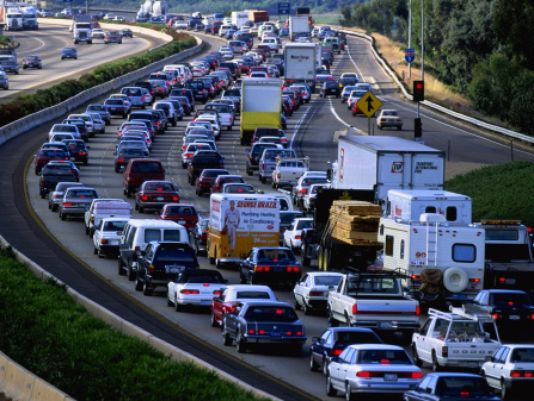 Automotive chaos has been on my mind lately.

Last week, I saw “Baby Driver,” a movie punctuated by many car chases and collisions. The wreckage incurred in the making of the film must have kept several Atlanta body-and-fender shops busy for months.

A few days earlier, we had driven from New Jersey to Nashville, a journey that included an unanticipated dead stop of three hours while several cars from two accidents were cleared off a stretch of highway five miles ahead.

This was the first such experience for me, and so I shared it in discussions with friends. Turns out these events are almost commonplace.

Everybody has a good sit-still-on-the-freeway story. Perhaps the best one I heard came from a man who with a friend sat 13 hours waiting for snow to be cleared after a big storm on the other side of a mountain pass.

Then I noticed press reports just about every day about highway backups, usually following truck accidents, that had traffic stacked up for miles and people waiting for hours, sometimes many hours, while the injured and damaged vehicle were moved.

These matters have become “dog bites man” situations, and so over time press attention has declined as might be expected. The only photos are cellphone pictures that find their way to Instagram or Twitter.

Here are a few reports of incidents on freeways known to me in a very short period.

In New Jersey, a dump truck overturned at around 5:30 a.m. on I-287 North at Exit 57 near Oakland. Eventually other vehicles, including a tractor-trailer, a box truck and uncounted automobiles, joined the tangle.

(I-287 is the New Jersey piece of a heavily trafficked New York regional ring road.)

All three northbound lanes were closed for more than 1.5 hours, and then the far right lane was opened. The press lost interest at that point, but two hours later, toward the end of the amusingly misnamed morning “rush hour,” one person reported on Twitter that traffic was inching along very, very slowly at every road near the the exit just before the accident.

A flatbed tractor trailer crashed in the northbound lanes of the New Jersey Turnpike, near Exit 13A, which leads to New Jersey port terminals.

The tractor trailer hit a box truck in the center lane at about 8 a.m., and then both trucks plowed into a Honda Civic in the left lane.

The box truck and the tractor trailer then hit the left guardrail, and all three vehicles came to a stop.  The big truck’s driver was taken to the hospital, where his condition was listed as serious.

This also happened during the morning “rush hour.” The left two lanes of the roadway were closed for five hours after the crash.

Around 2:50 a.m., a Honda SUV traded paint with a tractor-trailer in the westbound lanes of the Pennsylvania Turnpike.  Both men got out of their vehicles, and the Honda driver was struck and killed almost immediately by another passing vehicle.

The accident shut down all westbound lanes of the highway between two exits for nearly seven hours Saturday morning. 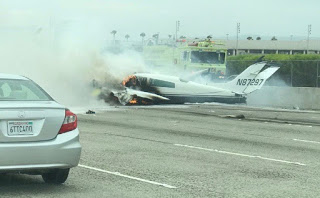 A Cessna 310 crash landed on the northbound lanes of I-405 just after 9:30 a.m. and burst into flames.  For a time, all 405 lanes in both directions were closed at the MacArthur exit to allow clearing debris to be removed

The plane had just taken off from John Wayne Airport in Orange County, and its right engine had failed.  The pilot tried to return to the airport and, unable to go that far, landed on the nearest stretch of straight road, one of the most clogged freeways in Southern California.

The plane crashed into the center divider of the freeway, then caught fire before striking the wall on the southbound side. Three vehicles going south on the freeway struck the plane or a part of it, while a vehicle going north struck the plane’s landing gear.  Pilot and passenger managed to get out with minor injuries.

The freeway reopened fully in both directions shortly  a little before 5 p.m., almost eight hours after the crash.

The 405 functions something like a parking lot in the best of times.  This was much, much worse, and it came on the day before the beginning of the four-day Fourth of July weekend.

These events happened over eight days in just three states.  Who knows how many situations like these occur nationwide every week of the year?

Reading these reports has been an eye-opener for me.  They have taught me that a little three-hour stop in freeway traffic, like mine, is now so common that it is rarely reported.  Dog bites man, and all that.  I will not complain the next time I am involved in such an incident.

What I will do is pack a meal and beverages before I undertake a drive of any length.  I will fill the car’s gas tank early and often.  I also will keep a pillow and afghan in the back seat should the opportunity for a nice nap arise unexpectedly.