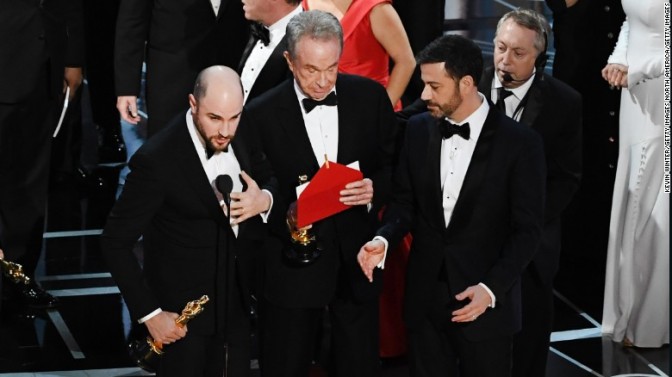 I read Monday morning about the snafu at the Academy Awards ceremony.  My initial guess was that Faye Dunaway and Warren Beatty had been too vain to wear reading glasses on stage and that they winged it, assuming that the odds-on favorite had won the best-picture prize.

As often happens, I was wrong.

It turned out later that a picture-taking CPA wasn’t paying attention and handed the wrong envelope to the presenters.

The whole business was awkward, but people are fallible.  We all make mistakes.

What is remarkable to me is that the incidence of mistakes seems to be increasing.

Take the cable companies (please.) The Significant Other and I have dealt with four of them in the last year, and the efforts have been frustrating, to say the least.

For economy, let me refer to all the cable companies as one because they all are pretty much the same — theoretically efficient companies that in fact are utterly dysfunctional.

Early in 2016, we knew that we would be spending the rest of the year away from our house.  We decided to cancel our internet, our television service and one phone line.  We wanted to keep the second phone connected to the house alarm.

Because these services are automated, this should have been a simple matter of flipping some switches at cable HQ.  But no. For the cable company, our matter was only a little less complicated than the Manhattan Project.

There were many, many phone conversations with different “customer service” people and several of their supervisors.  Each one assured us that situation had been resolved, except it never was.  This went on for months.  I’m still not certain that the irrelevant services have been canceled, but at least we’re not getting billed for them anymore.

Then we moved into a just-renovated apartment apartment in another city.  The cable company sent a tech to rewire the apartment.  It took hours, but the guy was nice and good-natured, which is always a plus.

When he left, neither the television nor the internet worked.  The Significant Other called the company.  After a long time on hold and several conversations with “customer service” representatives and also a supervisor, he decided we should take the new-to-us cable box to the cable company store.

“Oh, we don’t even use that cable box anymore,” said the desk clerk.

“So why’d you send it out to our place?” asked the SO.

“It was probably just in the truck,” said the clerk.

(Interesting fact.  When you cancel your cable service and return the company’s equipment, it is thrown into a storage closet. This equipment then jumps into the back of cable trucks and arrives in the homes of unsuspecting customers.)

Then we moved to a second apartment and decided to change cable service providers in the hope of getting better service.  What a mistake.

A tech came, nice guy, and spent four hours getting the thing going.  Except it didn’t work.
There followed a series of phone calls with “customer service” people at cable HQ.  Each representative knew just what was wrong and assured us that he or she had fixed the problem.  But the problem never was fixed.

A second tech, also nice, came and poked around the walls for three hours.  The signal worked, sorta, but not in the far reaches of our two-bedroom apartment.

This mystified the people at the cable company, who could offer no solution.  So we took the advice of a knowledgable television delivery guy and bought a repeater at Staples.  The situation improved, but I still am unable to convince our internet to send print messages from my desktop to the printer that sits three feet away.

(Another interesting fact.  Cable service in Southern California is very very slow, perhaps because the area is so rural and customers live so far away from signaling towers.)

Then there was the problem of the canceled service in the second apartment. It never got canceled.  There were repeated calls to “customer service” agents who assured that the service had been canceled.  Except it hadn’t.  All the “customer service” agents and several of their supervisors were quite confident that the mission had been accomplished.  It’s been more than month now, and we’re still not sure.

Let me sum up.  We have spent more than 60 hours on the telephone with “customer service” agents who do not know what they are doing.  The cable company has sent three tech people out who have taken many hours not doing what they assured us they were doing.

Maybe the cable employees are like that CPA at the Oscars, diddling with their cellphones instead of paying attention to the task at hand.  But I doubt it.

My suspicion is that the cable company employees just don’t know how their systems work or how to do their jobs.  If electric utilities’ performance were like that of the cable company, we would be reading by candlelight almost every night of the year.

I’m not sure exactly what can be done about this, but I do have an idea.

How about a new multi-disciplinary college curriculum?  It could be called the Department of Cable Services.

Think about it.  If college graduates trained in Cable Services could handle basic matters in single 10-minute phone calls instead of eight hours spread over many  conversations, the cable company would need fewer “customer services” phone personnel and could afford to pay each agent better.   (Also, the cable company’s security costs would go down because fewer customers would want to throw pipe bombs into cable HQ offices.)

For their part, aspiring cable technicians could take classes in how electricity works, how wireless signals are transmitted, how to run cable cords and how to read the menus on cable boxes.  Here again, the time savings — one-stop installations instead of several three-hour appointments — would allow the cable companies to offer more attractive wages and benefits.