There are certain design themes that are come up again and again in women’s fashion. One is color-block clothing. Other recent ones are camo fabric and cargo pants.

The most popular by far is animal prints.

The latter got its latest revival last fall when the luxy Gucci brand released a whole batch of shoes inspired by zebra stripes.

(Please note, the zebra patterns discussed below are not made of actual zebra hides. Only Cruella Deville advocates wearing actual animal skins anymore, and she is a cartoon character from 60 years ago.)

Here is the most-photographed of Gucci’s zebra offerings. 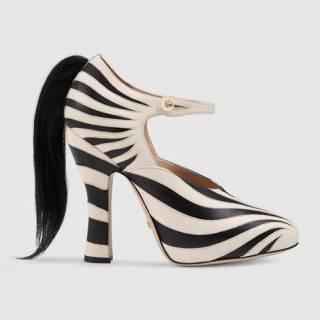 What is remarkable about this shoe is its innovative ponytail, reportedly made of goat hair.

Perhaps because of the unusual nature of the shoe, there were suggestions as to the different ways to wear it.

— And Gucci offered photographs of the shoe worn with the new look in hosiery. (See last year’s Idiosyncratist post on the new popularity of short socks.)

It is likely that the ponytailed zebra pump was designed mostly to attract attention. There is nothing wrong with that, of course, but few women are willing to spend $1,290 on four-inch shoes that get more comments than their well-tended faces or coifs, or their shapely legs.

In fact, Gucci released a more sedate version of the zebra pump, sans ponytail. It retailed for $990.

There also came a zebra version of Gucci’s Marmont pump with its famous double-G gold buckle, priced at $950.  I think of this as the Kate Middleton version.

A taller Marmont model, in black and gold, was priced at $980.

And there were more.Here is a zebra slipper — with genuine shearling lining — for $980. 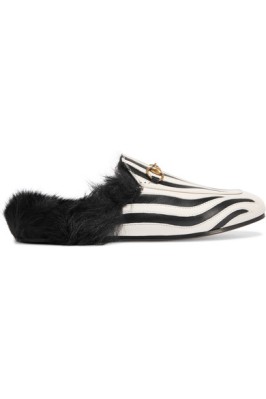 And finally, a high-top sneaker version, in men’s and women’s models, initially priced just under $1,000 and now available at deep discounts for the obvious reason.

It is possible that the point of the whole zebra exercise may have been to promote these traditional pumps, also by Gucci, which cost $400 and appear to have sold very well. 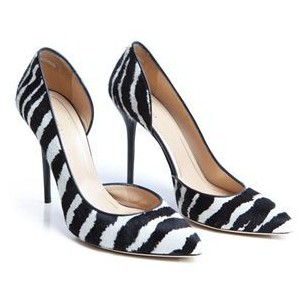 This shoe style is very flattering, at least on women who have are disciplined enough to walk in such things.  It’s a variation on the basic stiletto that fashion-forward gals might add to their wardrobes and wear occasionally over many years.
Copies

Like most fashion innovations, the zebra thing has been copied. Here are a couple tagalong versions.

The British retailer Topshop is offering what it calls “Women’s Pointed Zebra Heels By Unique.” They look uncomfortable, but the price is less than $300. 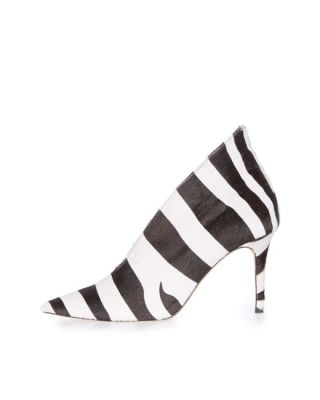 And, for real bargain shoppers, here are “Shoespie Zebra Open-toed cut-outs Ankle Wrap Stiletto Heel Sandals” for less than $80.  These are a dreadful appropriation not just of the zebra theme but also the strappy shoes phenomenon that I discussed recently.

Junk like this helps us understand why people like Gucci’s design chief, Alessandro Michele, earn the big money.