The year just ended was a difficult one — death and dislocation for many in the Middle East, tensions in Asia and Latin America, and a bitter election season in our own country.

As the new year begins, let’s keep in mind how many things have gone well for us. Consider the following from the latest novel of Ian McEwan:

Pessimism is too easy, even delicious, the badge and plume of intellectuals everywhere. It absolves the thinking classes of solutions. We excite ourselves with dark thoughts in plays, poems, novels, movies. And now in commentaries.

Why trust this account when humanity has never been so rich, so healthy, so long-lived?

When fewer die in wars and childbirth than ever before — and more knowledge, more truth by way of science was never so available to us all? When tender sympathies — for children, animals, alien religions, unknown, distant foreigners — swell daily? When hundreds of millions have been raised from wretched existence?

When, in the West, even the middling poor recline in armchairs, charmed by music as they steer themselves down smooth highways at four times the speed of a galloping horse?

When smallpox, polio, cholera, measles, high infant mortality, illiteracy, public executions and routine state torture have been banished from so many countries?

Not so long ago, all these curses were everywhere.

When solar panels and wind farms and nuclear energy and inventions not yet known will deliver us from the sewage of carbon dioxide, and GM crops will save us from the ravages of chemical farming and the poorest from starvation? When the worldwide migration to cities will return vast tracts of land to wilderness, will lower birth rates, and rescue women from ignorant village patriarchs?

What of the commonplace miracles that would make a manual laborer the envy of Caesar Augustus: pain-free dentistry, electric light, instant contact with people we love, with the best music the world has known, with the cuisine of a dozen cultures?

We’re bloated with privileges and delights, as well as complaints, and the rest who are not will be soon….

We’ll always be troubled by how things are — that’s how it stands with the difficult gift of consciousness. 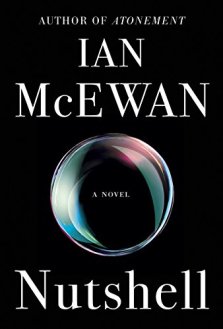 The above comes from McEwan’s latest novel, “Nutshell.” McEwan is known for improbable plots — think of “Atonement,” which became an award-winning movie, or “Amsterdam,” which won the Mann Booker Prize.

“Nutshell” takes the improbable and goes several steps further. It is a first-person story told by a yet-unborn baby, whose observations include the one above.

Strange as that set-up sounds, McEwan makes it work.

The book opens when the baby is about one month from birth. His mother has thrown her husband, his father, out of the father’s rundown townhouse in an expensive London neighborhood. Now the baby’s disreputable uncle, brother of the baby’s father, is plotting with the baby’s mother to kill the baby’s father and to live well on the proceeds from the sale of the house.

The baby, dependent on his mother and loving her for his nurture, also feels loyalty to his father and not a little anger at his uncle or the prospect of growing up with the two of them.

The title comes from an early passage in Shakespeare’s “Hamlet,” when Claudius, usurper to the Danish throne once occupied by Prince Hamlet’s father, sends emissaries to find out why Hamlet is so blue.

At that point in the play, Hamlet knows that Claudius has married Hamlet’s mother, but he has not yet learned that Claudius killed King Hamlet.

“I could be bounded in a nutshell and count myself a king of infinite space,” Hamlet says in the play.

You can see the parallels between play and novel — Claudius the murderous usurper/ Claude the murder-minded dumber brother. The baby of “Nutshell” is the king of his own small space.

He also shares observations not associated with small children, let alone children not yet born, as the plot spools out to its conclusion.

“Nutshell” runs to an economical 208 pages, and McEwan knows how to tell a story. Check it out.