Now that a second polar vortex is hovering over much of the country, it’s time to talk about warm coats.

Below is a Balenciaga quilted coat that was well-received in the autumn/winter shows last spring.

The people at Balenciaga don’t seem to have been thinking much about actual cold weather when they put this look out on runways. You can see the problems: The coat is sliding off the model’s shoulder, there is no scarf or hat, and the shoes are worn without socks.

And another point: The red design was not called a coat; it was described as a “puffer.”

In fact all this year’s quilted coats (and possibly some of last year’s; I can’t keep up) are called puffers. We have to get used to it.

At the same time the women’s number pictured above was grabbing attention, Raf Simon’s menswear collection was showing puffers like these.

These coats look thick enough for a Himalayan trek, but a guy also would need snow boots, heavy gloves, a big hat and goggles if he intended to use one for that purpose. If a city fellow wearing such a coat sat next to me on the train, I’m pretty sure I’d end up scrunched into half a seat.

There are various other puffer looks for women this year. Here are a few designer models that range from short to long, colors bright to neutral and sportswear- to evening-appropriate. 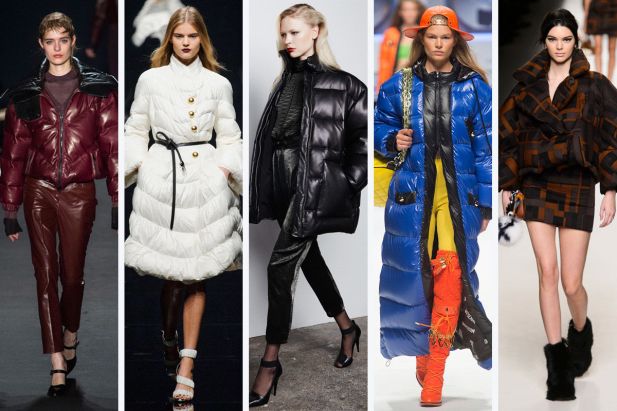 For those in more temperate climes or with limited closet space, there’s another sort of puffer now — short and closely fitted — for both men and women.

The Guess company offers the coat below for men. A similar silhouette is found in men’s sweaters and sweatshirts this season. 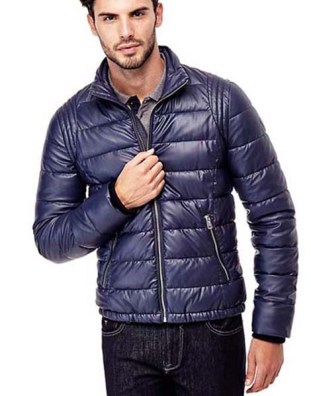 The women’s jacket below is from Patagonia, which is calling this year’s versions “nano-puffs” or “down shirts.”

These new puffers may give a boost to the beleaguered fashion industry. Last year’s mild winter weather left apparel retailers with large inventories of unsold winter coats when spring arrived.

Given the unusually cold weather we’ve already seen this December, I’m betting puffers will be in high demand.

According to a 2013 piece in GQ, the founder of the eponymous Eddie Bauer catalog and chain of outdoor stores was inspired to make the first quilted down jacket after his soaked wool jacket threatened him with hypothermia during a chilly night in the wilderness in the 1930s.

His solution was a down-filled jacket with ribbed collars and cuffs. The quilting assured that the down was distributed evenly in the garment and did not puddle at the lower hemline, and the ribbing held in body heat.

The product, patented and named the Skyliner, was released in 1939. Skiers and outdoor enthusiasts of all types have worn quilted down clothing and spent outdoor nights in quilted down sleeping bags ever since.

My guess is that down jackets, like athletic shoes, began to become daily wardrobe staples in the 1960s, when the baby boomers came of age and adopted blue jeans as everyday fashion. Fifty years later, jeans, outdoor gear and athletic clothing are seen more often than the dresses and suits that were the staples of previous generations’ daily wardrobes.