A Short History of Boots

People have worn boots for more than 500 years. In the early days, boots with heels were favored by cavalry officers. Then came infantry boots through many wars; these now are called combat boots and are most often seen in light camo patterns. Farm families and industrial workers lived and worked in protective boots. Ranchers and then business guys in the American west favored intricate cowboy boots. Then came variations: Rubber boots for children during the rainy seasons, hip waders for fly fisherman, apres-surf Uggs for Australians, etc. Sometime in the 20th century, perhaps during the go-go period of the 1960s, boots began the crossover from utilitarian wear to fashion.

Women’s boots now come in all lengths, from booties to above the knee and no longer are made exclusively of leather. They are worn in all seasons, not just winter, and now are popular in suede and even velvet. This year, ankle boots are particularly popular.

The latest iteration in fashionable boots appears to be patterned boots.

I am not sure where this began, but this Valentino boot from early 2015 may have started the trend. It is of decorated leather with flowers.

In 2016, Valentino has offered other patterned boots for women in different shapes. 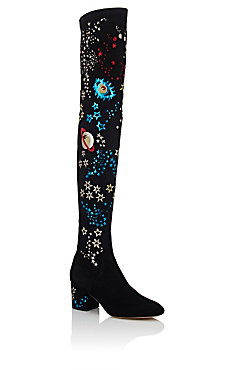 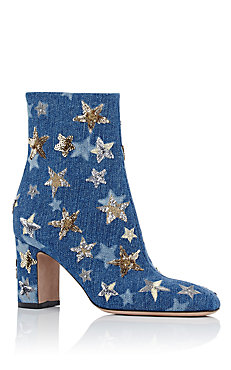 Except for the last iteration, I believe that girly girls would go for these looks.

Meanwhile, many other designers released patterned boots in 2016, often in floral themes. 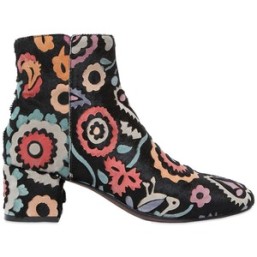 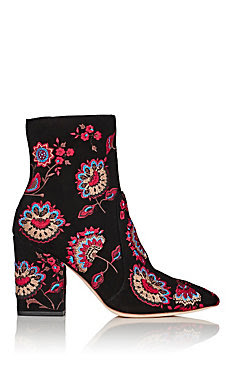 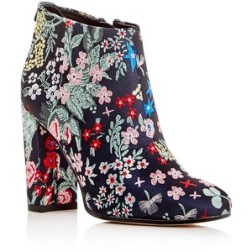 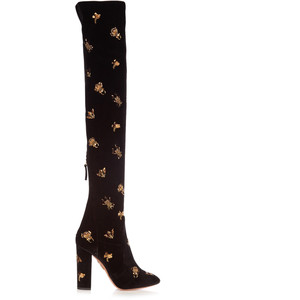 I could go on, but I think I’ve made my point.

These boots are interesting and nice, but I don’t see how most women could use them, except for dressy events.

Some may argue that a pair of flowered or starred or insect-decorated boots would create some interest in an otherwise all-black outfit, or a black and white one. This doesn’t make sense to me because, the women who wear all black are minimalists. Minimalists don’t do frippery.

These boots are novelties best suited to fancy events. A high-heeled over-the-knee number could look pretty smashing with a very short skirt at a cocktail party. (Assuming people go to cocktail parties these days.) A flowered ankle boot worn with dressy pants would be nice for an evening at the opera.

As for yield on the investment dollar, these boots do not offer good value for women who do not go out several times each week through at least one full formal season. The boots are expensive, and their shelf lives are short.

For fashion designers, something like a patterned boot may make sense for a couple reasons.

First it may draw enough interest to a particular design to sell solid-colored examples of the same look.

Second, if it becomes very popular, it will be hard to copy. The fashion world is full of spies — taking pictures at runway shows, riffling through merch in high-end stores — and of manufacturers eager to piggyback on the latest trend. If the trend involves unique embroidered designs or hand placement of embellishments on expensive fabric, then it will be expensive to replicate with cheap knock-offs.