Yesterday I noted that women’s stockings — specifically crew socks and ankle socks — were making a comeback in street fashions in Europe and parts of the United States.

This fall’s ready-to-wear designer shows seem to be making the new look official.

Hermes is selling the pump below in several colors with coordinating short socks and longish skirts. 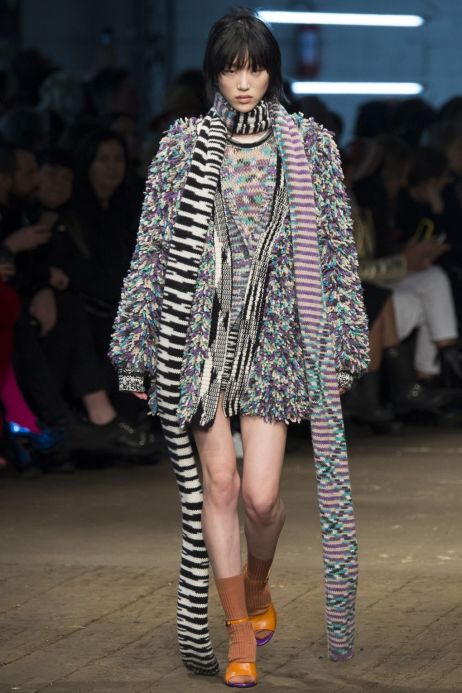 Rochas of Paris has shown street socks occasionally since at least 2011. Here’s a pre-fall show look. The autumn ready-to-wear line has many other outfits, most with longer, looser, cable-knit stockings in colors that contrast with dresses and skirts.

Anthony Vaccarello, who was named recently to replace Hedi Slimane as creative director at Saint Laurent, has been showing black socks with high-heeled sandals for at least a year.   This fall he paired the black socks with white sandals, as in the example below.

In a signal that perhaps this not is just a European trend, these three looks from Tommy Hilfiger showed various outfits, even very short ones, with socks.

To Adopt or Not to Adopt?

Some of these looks seem jarring to my traditional eye. I could more easily imagine them in neutral colors than as bright contrasts. And I would avoid wearing them with micro-mini skirts and dresses because I would worry about looking like an overgrown toddler.

What I might try is wearing such stockings with ankle boots and knee-length or longer skirts and with some of the new, shorter pants.

In fact, hosiery manufacturers are all over this idea. Every department store or online fashion site is offering multiple crew socks types, from laced-topped to neon shades to fishnets.

Since even the most expensive stockings are cheaper than most fashion purchases, why not give these a try?