I wasn’t in New York on 9/11. It was a beautiful day, and I was pulling weeds outside when my father called to ask after the health of the Significant Other.

An hour or so later, I picked up the Younger Person at his school, which closed early that day. By then, the husband of one of the teachers in the upper grades was dead. So was the sister of a woman who lived on the next block over.

The next week, I talked with an economist whose office overlooked the twin towers. “I saw things I shouldn’t have seen,” he said. He meant hundreds of people jumping from the scorching top floors of the buildings.

The week after that, on Sunday, we went downtown. Lines of heavy trucks were carting wreckage out of the city, a process that took months. The harsh, acrid smell was everywhere.

What I remember most are the pictures. Families and friends had posted notices and photographs all over the area, hoping that loved ones would be found alive.

All the missing people were dead, of course. Their families, at best, might recover part of a leg or a piece of jewelry. For most families, there was nothing to find.

I rarely think of these things now, but on this day every year the memories return. 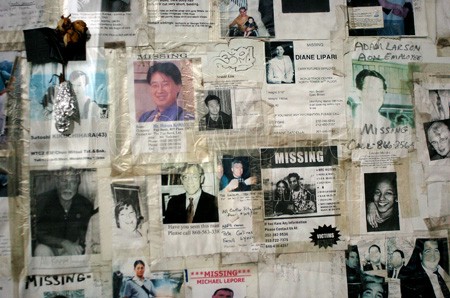