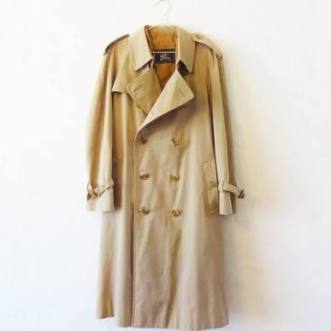 You are certainly familiar with the Burberry brand. The company was founded as a military supplier in the 19th century and then became known for the (not particularly rainproof) khaki trench coats it supplied to British soldiers in World War I. The coats were double-breasted and came with waist belts that included metal loops that I once heard were for securing grenades, which certainly might have been handy during trench battles.

Trench coats were popular with movie tough guys in the last century, perhaps most notably Humphrey Bogart, whose trench was known for years afterward as the “Casablanca coat.” Other stars adopted the fashion, including Kirk Douglas, Steve McQueen, Sophia Loren and the Hepburns (Katharine and Audrey.) As the trench caught on, other companies from high-end Aquascutum to mid-priced London Fog released their own versions.

After some years, Burberry reasserted itself in the market by marketing the traditional lining fabric found in its trench coats (see left.) That plaid got slapped on everything from scarves to watchbands to rubber boots to very unattractive shirts for men and women. This was a good strategy in the years when people signaled how expensive their clothes and handbags were by wearing and carrying items with polo players and LV insignias, among others.

Burberry also moved into other products. It now has three high-end fashion lines: regular Burberry, Burberry Prorsum (fashion-forward) and a casual line. There are 63 Burberry stores in the United States alone and many others worldwide. Inside you will find unbelted coats and skirts and and assorted clothing for men and women.

Over the years, I have bought two nice Burberry trench coats, one in red without the plaid lining, and liked them very much. I also have visited a Burberry store several times but never have bought any of the company’s other products, which I found expensive and, frankly, not that interesting.

(My fashion rule: If I visit the same store three times and never see anything I like, that’s it; I don’t go back.)

But my lack of enthusiasm has not dimmed the hopes of the Burberry organization. It is putting its name on more and more products and getting further and further from the items that made it famous.

A few weeks ago I saw a Sephora advertisement for a new Burberry product. Here it is:

But not to me. You can carry this leveraging business too far.