Here is a boot much featured in the fashion press for this year’s fall season. It comes from designer Marc Jacobs and also is being sold in basic black and mauve.

If you walk out on the street wearing these, you will be eight inches taller. You either will look very skinny or flamingo-esque.

I don’t know how popular these boots are or will be, but a notable assortment of them are out there at the moment.

Paris-based Vetements is pitching a more subdued platform look. If you find it boring in black, well, there is also a neon yellow version. 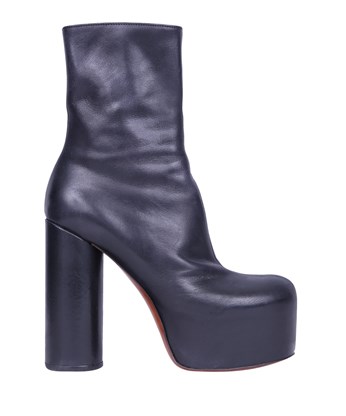 Vera Wang has introduced these models. 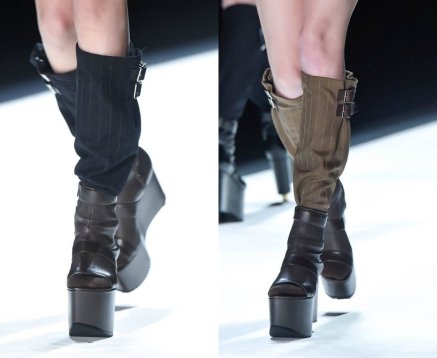 Finally, these two budget models from Demonia by Pleaser can be purchased on Amazon.

This boot has a topper of stretchy fabric.

And this one is also available in a nine-buckle model. (Nobody has the patience to fasten that many buckles; I’m pretty sure these boots have zippers as well.) 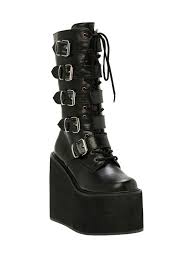 (Of course this firm is all over the combat boot thing, which I mentioned in an early August post on the Dr. Martens revival.)

Platforms are not just for boots. There have been sky-high platform sandals and high-platform shoes as well this year. The trend that started a couple years ago with flat to mid-heeled shoes may now may be reaching its figurative and literal apogee.

In fact, high platforms have been popular before.

Here is a picture of some 1970s-era platforms that I found on a website called tracyhighschoolclassof1976.com. They look familiar, don’t they? 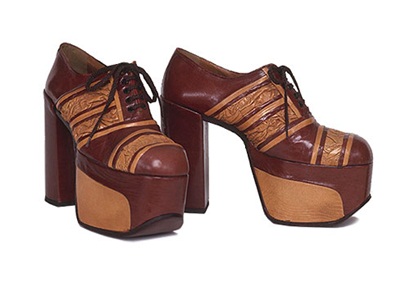 (I would not be surprised if platform shoes were a fashion “thing” in ancient cultures, but I am a modern observer, not an anthropologist. Such unwieldy shoes in earlier times, perhaps as now, may have signaled high social status, indicating that the wearers were ladies of leisure — such lofty heights effectively would hobble women, making it impossible for them to haul water, clean floors or tend to meats roasting on spits. If there were feminists in those times, there also might have been social critiques as well. But I digress.)

This trend also was big in the 1990s, especially with English designer Vivienne Westwood, who may have been the first to call such footwear “platforms.” Her point was that very tall shoes functioned as the base on which a beautiful woman was displayed, rather as a classical figurative sculpture often is displayed on a square plinth platform.

Westwood may have had a point. Here is a small statue of Peter Pan on a plinth. Without the platform, the statue might go unnoticed.

These boots are interesting and unusual, but they are not for awkward people. I’m pretty sure that I could not walk far on them without falling down.

In fact, this happened. There was a famous incident at a Vivienne Westwood show in Paris in 1993. Supermodel Naomi Campbell walked down the runway in (I believe) a pair of Westwood shoes like the nine-inch number shown below.

Here is the unfortunate result.

Youtube has similar videos of similar falls at fashion shows in the years since.

It may be that exaggerated platforms, like the Marc Jacobs one pictured at the top, are to everyday footwear what concept cars are to normal automobiles.

Keep this in mind if you are considering investing in boots like these.