(Apologies for the wretched spacing, which refuses to be corrected. Look here for a more reasonable rendition.)

While Americans in Houston and the southeast deal with severe hurricanes and flooding, in the Pacific Northwest there is a different concern: an unusually active forest fire season.

The Idiosyncratist spent last weekend and the first part of the week in northeast Washington state and north Idaho, where talk of fire and smoke was common.

By Monday, the air in Spokane smelled of smoke and the sky was gray, not its usual blue.   Newspapers warned of increasing smoke from fires in Montana and Canada.

Here are fire and smoke maps from Tuesday. 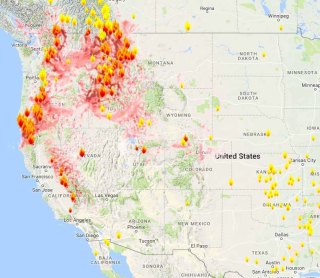 Below is a Forest Service fire map from the same day.

After these images were released, existing fires grew bigger and other blazes began.  Many of the fires continue to burn.
Flames
Forest fires are lit by lightning storms.  (The exception this year is Oregon’s Eagle Creek fire, which a teenager has admitted he started with a firecracker.)   Dry summer conditions allow fires to spread from tree to tree, and wind-borne embers can travel a quarter mile or more to set new fires.
One of the biggest fires this year is the Rice Ridge Fire in Montana, which was lit by a lightning spark on the afternoon of July 24.  As of yesterday, it had burned 123,000 acres and was about 5 percent contained.
According to wildfiretoday.com, “The objective on the fire is not to put it out or contain it, but to herd it around as necessary to protect private property and structures.”
On Friday, officials announced a planned burnout, which I believe means setting a deliberate fire ahead of where the wildfire is headed; the purpose is to destroy plant life that will feed the fire and thus to stop the fire in its path.
There have been occasional high-fire years since the turn of the millennium, but the 2017 incidence of forest fires has been particularly high.
On Friday, wildfiretoday.com said this:
“The 10-year average of the acres burned in the U.S. to this date (September 8) is 5,515,998, while 8,036,858 acres have burned to date this year (National Interagency Fire Center, September 8, 2017). That is a 48 percent increase over the average.”
Smoke
Below is a picture from a hotel room of Coeur d’Alene Lake and Tubb’s Hill in North Idaho on a cloudy day.

The Significant Other and I stayed at the same hotel last Tuesday.  Here is my cellphone image from a similar location at midday, plus a picture of the sun taken just afterward.

Below, from a forester friend, are two photos of a Mount Shasta view in Northern California’s Siskiyou County.  The first is from winter 2016.   The second was taken earlier this week. 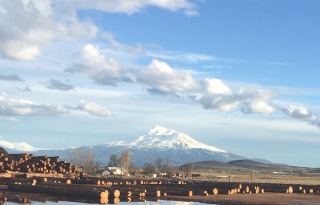 The forester told me that a measurement of air-borne particulates in Weed, Calif., that day had registered 450 on a 0-500 scale.  Any measurement over 300 is regarded as hazardous.
As a result, schools in the region canceled outdoor recess.  People with vulnerable health were advised to remain indoors in Washington, Idaho, Oregon and California.   The hope is that rain over the weekend will improve the air and, ideally, extinguish the fires.
Context
My forester friend shared some of his thoughts in an email the other day.  Here’s what he said:
“This has been my reality for the past 5 years with smoke burying us typically for one or two months each summer.  Currently we are one month into it, and I wouldn’t expect it to change significantly anytime soon given all the current fires going on. It’s become an annual event.
“I’m sure that drought has had some influence with dead and dying trees being more susceptible, as has last year’s heavy rains/snow creating more dead grasses in certain areas — but I’m convinced that these fires are more related to environmental and land management changes.
“Environmental changes are what they are.   It’s getting warmer, and weather (moisture) patterns are changing.  That’s a fact.
“On the land management side there were significant changes beginning 20-25+ years ago that are coming to affect us now.  We all know that lower-intensity fire was a common occurrence before human influence, and this resulted in a more varied forest composition (by size, age, species).  This was replaced by clear-cut logging and aggressive firefighting of any and all fires which was effective in minimizing the size of fires as the forest was more fragmented — the fuels loading was more diverse.  This is still the case on most private industrial lands.  What has changed, though, is that Forest Service/BLM.  (Fire-fighting) activities on federal land have become almost nonexistent and given previous activities, these lands are coming back with dense, even aged stands that can’t tolerate fire.”

2 thoughts on “The West Is Burning”